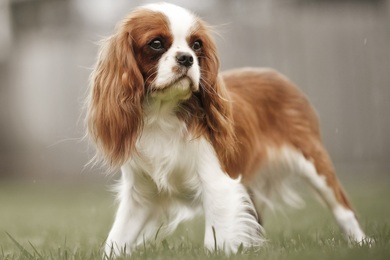 I had the opportunity to use a wonderful stud dog that picked up  some very admirable imported lines.   Lines that I had long admired, and lines that I thought would compliment  my Marcavan Bitch, Marcavan Little Poppett.

My Little Billie-Lid was the pick of the females.   She had such depth of color and such a lovely head shape and personality  plus.  She was such a funny little  mummies girl.  Her and her mother  were always as close as peas in pods.

Billie was a lovely petite girl who was very gentle, and very loving.   Billie-Lid at 13 months of age “adopted” my daughters kitten.   Billie-Lid was not in season, she had never been mated, but she had such a lovely maternal instinct that she took on this little kitten when he came  home.  Jizz the kitten was missing  his mum, so Billie-Lid took him on, and allowed her instincts to take over.  Billie-Lid encouraged the kitten to snuggle in to her, and such was the bond between the Cavalier and the kitten,  the kitten actually suckled from Billie-Lid for quite a few weeks.   Eventually the kitten decided he was a big boy and no longer needed the  comfort.  To be honest, I think  Billie was a little disappointed when the reliance came to an end.

Unfortunately, unbeknown to me, Billie had Syringomyelia.  I was not aware of this for Billie until her 3rd litter was 10 days old.  Until that time, Billie was displaying normal dog behaviour, with an occasional but persistent scratch of the neck, particularly when she was wearing a collar.  As I do not have my dogs wear collars at home, I thought she just did not like wearing it when we were out of the house.  One day, Billie started to paw at her jaw and was in obvious discomfort.  That is when the penny hit the ground.  I had Billie until she was nearly 6 years of age, and the day came when I realised that she was in so much pain, I could not allow her to continue to battle - it was not fair to her and it broke my heart - It still breaks my heart.  I will finish this paragragh by saying that the line has stopped there.  There are none of Billies babies that are entire, so that is of comfort to me that this will not continue under my prefix.