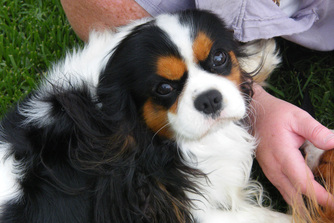 Maryanne approached me to take over one of her show dogs.  He needed to mature and round off, he needed some work on his coat and he needed a friend.  In comes Chiencav Harlequin an ugly duckling that proved to be a beautiful swan.

Quincy and Bethany had an instant rapport.  It was like someone had flicked a switch and they understood they were meant to be best friends, soul mates even.  The immediate bond between the two was so strong, it remains impenetrable.   During our play times and the development of this beautiful tri boy’s personality, we have altered his name to Guncey because that fits his happy, funny, quirky personality better.  Guncey has a personality that displays he does not have a care in the world – unless it is in the show ring.

During our association with Maryanne – prior to her relocating to Tasmania – Maryanne introduced Bethany to the show world.  Beth shadowed Maryanne, and handled at shows for her and with her.  Beth picked up tricks of the trade and handy pieces of information about these magnificent animals.

Our little man Guncey has a pedigree to die for, the most beautiful face and a nicely conformed body, however, because he does not like showing, he gave Beth one good round in the show ring (if she was lucky), he usually won his class for the shows he was entered and then he would hump his back and show the most peculiar top line.  Get him out of the show ring and he was happy again, with a flat top line.  Frustration PLUS!  He hated showing that much, it was not worth putting him through the stress – Guncey is happy in his retirement, being a scally wag at home, a couch potato and Beth’s constant companion.