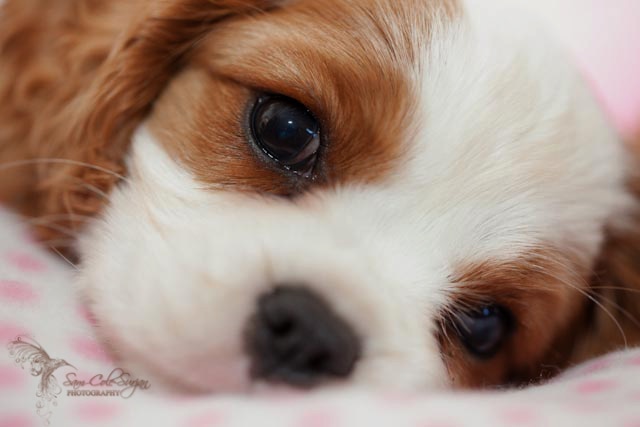 BessBree The Dame – AKA Possum - now living with my friends Maggie and Sam in Lakes Entrance and loving life.

My beautiful little miracle puppy and a true Possum.  This little girl was a gift.  Her mother was a proven bitch, and after 2 failed matings, I decided to try one more time.  I contacted Dona Tait of Davmur Cavaliers who owned a lovely dog with a nice pedigree.  Pooh was watched like a hawk and blood tests done to check the Progesterone Levels to ensure we were mating at the optimum time, and a nervous wait started.

Day 21 I marched Pooh off to see my Vet for Palpation to see if he could confirm a whelp.  He looked at me and shook his head, he could not feel anything, she is empty again.  With a heavy heart we decided that Pooh had finished her maternal duties and as soon as her hormones settled down we would spay her.  Christmas was approaching, and I looked down at Pooh and thought she was putting on a little bit of weight.  But a diet will have to wait until after Christmas so I could figure out what was out of balance in her diet.  Christmas came and went, and early to mid January came about and Pooh walked over to me and I thought Geez your putting on weight.  Must be time to figure out what the problem was.

I reached down to Pooh and picked her and I was presented with a hand full of erect nipples.  I turned her over and I saw a lovely pink flush (which is a tell tale sign of pregnancy) and she had even produced milk.  Either this was a really good phantom pregnancy or it was the real deal.

I watched Pooh like a hawk again, and after a week or so, I could see and feel movement in her tummy. No doubt about it, she was pregnant and due to whelp in about 10 days. Pooh got fatter and fatter and fatter.  She had always been a 6 pup girl in the past and according to the size of her this time, there was nothing to suggest she did not have 6 on board again.

When she went into whelp, it was early morning on 26th January 2013 – Australia Day.   We were in the middle of a thunder storm, and Pooh needed a Caesar.  I called the Vet and organised for us to go in, and while the Vet and Nurse were getting organised, we were taking bets on how many on board. The Vet nurse said 5, I said I would not be surprised to see 7 because she was bigger than any other time before, the Vet decided to split the difference and chose 6.

You could not imagine our amazement when the C-Section was underway and the Vet delivered ONE puppy!.  One single puppy.  She was a good size, but not enormous and we were all so surprised the Vet checked the uterus 3 times.  ONE MIRACLE LITTLE GIRL.

It was now 6:30 in the morning on Australia Day, and there was no doubt in my mind what she would be called.  There is nothing closer to Australian Royalty than Dame Edna Everidge so this little miracle girl would be known as BessBree The Dame and naturally her call name would be “Possum”

Possum thrived (as singletons usually do) and she was a very pretty little girl from the very start.  Pooh has provided me with another girl to carry on her line and she could now retire in style.

Possum continued to delight me in many, many ways.  She is a beautifully put together girl who has many attributes.  She has a personality as big as Dame Edna’s and she is a smart, gregarious bundle of fun.  Possum was never destined to be a show dog, and she has blessed me with one litter of two really lovely puppies.  One Blenheim girl and one Blenheim boy.