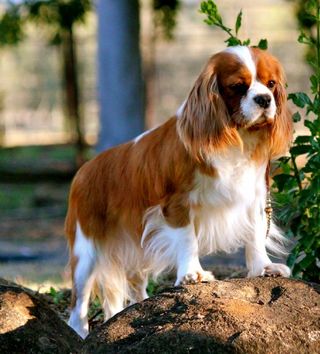 I first met Paul Nichols of Dunsfold Cavaliers quite a few years ago at the Cavalier Specialty Show in Melbourne.  Paul was generous enough to sit beside me and verbalise what he could see regarding the dogs in the show ring.  Explaining to me what to look out for, what he liked to see and the reasons why.  I will always be grateful to Paul for giving generously of his time.

Through the association with Mary-Anne Silvester and the show scene, I crossed paths with Paul on occasions and I always found Paul to be the same generous man, who took time out for everyone, and his passion for these beautiful dogs was only surpassed by the way he trained them for the show ring.

I watched Paul work with one of his dogs that was not behaving as well as he could have for another handler, and as soon as Paul gently spoke to this dog, it was immediately evident that Paul had the dog’s absolute and undivided attention and respect.  I was blown away.

I lost touch with Paul for a while, as I stopped travelling as far for shows and Paul moved interstate with his family, however with the miracle of facebook, I was able to find him again and I am incredibly pleased I did.  Through a conversation, the opportunity to welcome CH Dunsfold Adelaide into my household came to the fore.  Naturally, when that opportunity presents itself, you do not hesitate.  Paul gave me his assessment of Adelaide and this is an extract of what he saw:

And guess what, that is exactly what I have!

Adelaide is one of the most easy going Cavaliers.  She is slightly reserved with new people, but it does not take long before she comes out of her shell, and when she does – she is a real character.   Adelaide was a dream to have in the house, she had her place in the middle of the pecking order, and she was more than comfortable there.  She made no fuss and apart from her SUPER HIGH prey drive (we don’t let her near chickens – we have learnt that the hard way) she was a dream to have around.

Adelaide had two litters for me, however pregnancy and whelp did not agree with her.  She developed a rare condition called Canine Maternal Hydrops in her first pregnancy.  She had a Caesar, and lost a lot of fluid, but she successfully raised her 4 pups.  Canine Maternal Hydrops is not a common condition, and even more uncommon in Cavaliers, and almost unheard of to develop in the second litter.  This condition is so rare that even Veterinarians are largely unaware of the condition, and the only information to be found on it is largely anecdotal.  I decided to try again for her second litter, but this time, Adelaide carried seven puppies and when she went into whelp, I raced her to the vet for an emergency Caesarian.  Again, Adelaide lost so much fluid, she went into shock, and again unfortunately 6 out of 7 of the puppies did not survive and it was touch and go for the 7th puppy.  My Little Digger and I fought hard for him to survive, but Adelaide was so sick, she could not cope with looking after that one dear little man.  I hand raised "Digger", however after a couple of days Adelaide's maternal instincts kicked in and she looked after him, but she did not produce any milk to feed the little tyke.  Digger was bottle fed until I weaned him.  He is a very special little man.